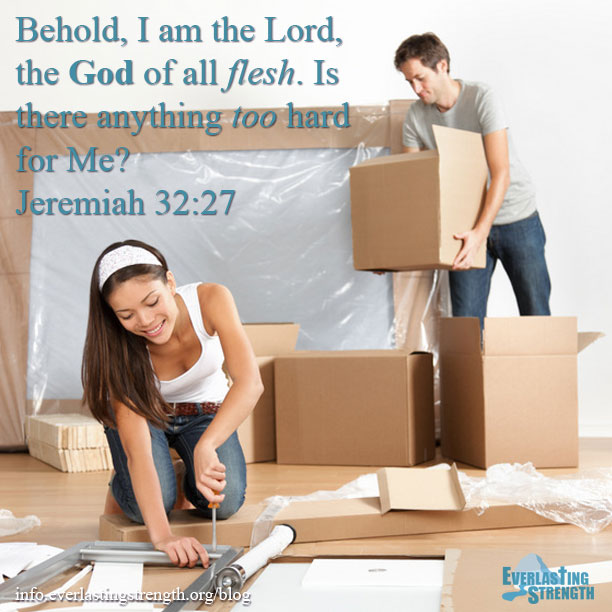 “Behold, I am the Lord, the God of all flesh. Is there anything too hard for Me?”

My wife and I were helping a homeless couple get back on their feet and into some housing last year. The man was a veteran. I figured that there must be some assistance for him so I called my office manager since we work with the Veterans Administration (VA). I figured we might be able to find a good contact for him. When I explained the situation to her she said, “You are not going to believe this, but I am with the Veteran’s liaison to the Senator right now. He deals exactly with these types of situations!”

“That’s crazy,” I exclaimed after a brief pause from the amazement of what was happening. We gave the liaison his information and within three weeks they were ready to be approved for housing! Everyone was so excited until an unexpected glitch occurred. The landlord for the house decided to decline his offer of housing at the last minute on a Friday afternoon. I got the bad news from John, the man we were helping. He was dejected and rightfully upset. “It’s not over yet,” I said to encourage him. “Let me call the landlord and if he still says no then God has another house in mind for you.”

I called the landlord and explained the situation. He didn’t want to deal with any headaches since he was retired. He had evidently had some tenant problems in the past. He informed me that he had already called the VA and canceled the walk through for Monday. We got off the phone and I prayed to the Lord for His will to be done.

Then around 4:30 PM he called me back and decided he had changed his mind. He was apologetic and explained that he tried to call the VA to reinstate the appointment, but they were closed. Evidently the way the system works, once the appointment is canceled it would take another 2-3 weeks to get another one scheduled. He said he left a message on the woman’s voicemail who was in charge. I spoke with John. He was grateful that the man changed his mind but was really upset about having to be without a home for another few weeks.

So here we were. The only way that they could move in on Monday was if the lady who worked there put the appointment back in the system on a Friday night when the VA is closed. It was impossible! Or was it? Not for God.

I was driving the couple back to a hotel and was explaining in the car that the Lord likes to come through in the eleventh hour. If He didn’t in this situation, then we would know that He had another plan. Suddenly, John’s phone rang. It was around 7:30 pm. I couldn’t hear what was being said but could tell it was good news by the growing grin on his face. He hung up and said, “You are not going to believe this! It was the lady from the VA. The appointment is back on!” “How?!” I asked. “That’s impossible!”

“She ‘just happened’ to have forgotten her cell phone at the office. She went back to her desk and saw her voicemail light blinking. She listened to the message and put the appointment back in the system! Can you believe that?!”

I was dumbfounded and said “Yeah! Only God could do that! See how much He cares about you?” God is God!
GregV TheWord MD, Spiritual Doctor

The Details of Divine Love

GOD IS IN THE MIDST OF EVERYTHING!